15 Useful Tips To Experience Curaçao Carnaval to the Max

15 Useful Tips To Experience Curaçao Carnaval to the Max

Curaçao Carnaval or the “Karnaval di Korsou” is by far the biggest traditional event of Curaçao, one the locals are very proud of, and they should be! The carnival is part of Curaçao’s heritage and it’s a great way to experience local culture. To be able to experience this event to the max it might be very helpful to read below 15 tips.

Every year Curaçao Carnaval falls on a different date somewhere in February or early March. This year the annual event will take place early February. To be precise the main parades will be on 7 & 9 February. The Main Parade, called the Gran Marcha, is on Sunday the 7th during the day. While the Farewell Parade, Marcha di Despedida, is on Tuesday the 9th is at night.

Curaçao Carnaval is not just one parade, it actually consists of several different parades.The Horse Carnaval Parade kicks of the carnival on the 24th of January. Beautifully decorated horses and their riders pride the streets during this parade. Followed on the 31st by the Children Carnaval Parade and the Children’s Farewell Parade on the 8th of February. it’s really adorable to see all the kids in their colorful costumes. Go support the youth by cheering along the roads! The Teener Parade is on the evening of the 5th of February and it’s a fun short parade gathering the dancing teens of Curacao. On the 6th there is the modest Banda Bou Carnaval. Of course the biggest attractions are still the Gran Marcha on the 7th February and the Farewell Carnaval Parade the 9th. See below the complete schedule, with starting point and starting time. 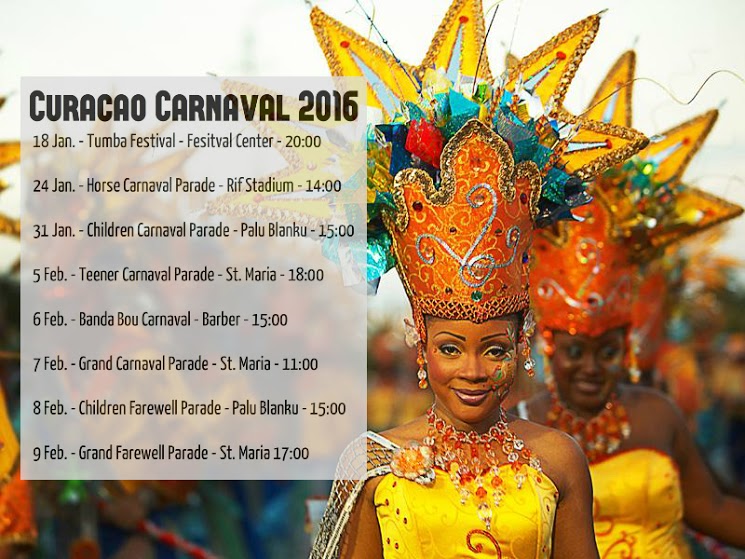 Participate: Participants swear by participation and often wouldn’t want to experience Curaçao Carnaval any other way. By participating you really get the chance to feel what the carnival is like from within, many say it feels like you are part of one big family. Yes, you can participate too! Just to give you an idea; participation costs for most groups are on average around $500 all included. Be aware that you need to be fit and have comfortable shoes to walk, or better yet, dance the many miles away. Via this Carnaval Group List you can see some of the group details, although the 2015 list has not been updated, most contact info still works.

Watch: Of course participation is not an option for everyone, due to time, finance or other limitations. Enjoying Curaçao Carnaval from the sideline is definitely a feast for your eyes! In contrary to participating, watching the parade gives you a good overview of the entire event, the atmosphere and all the beautiful groups. For fully experiencing Curaçao Carnaval from the sidelines make sure your read tips 4, 5 and 6.

4. Where to watch the parade? 2 options: Free or Paid

Free: All along the almost 6 km route there are many spots where you can freely watch the parade. Weeks in advance family and friends already reserve their spot along the route by marking it with chairs, benches or by building complete stands. Along the route there are some places to buy food & drinks, but not many. Hence most people bring along their own coolbox with drinks and snacks. Some people prefer to walk around, others prefer to bring a chair to be able to sit, as the parade can take a while to pass by.

Paid: Nowadays it’s more and more popular to get tickets at the big stands. You can get tickets per parade or a passe partout for all of them. Together with a number of party people you will have a private shared location. Most stands are elevated or have a grandstand from where you can clearly see the parade pass by. It’s also easy to strike up a conversation or have a dance with your neighbor. The stands are often all inclusive with drinks and snacks. Besides a save and reserved spot at the parade it also takes away the hassle of carrying your coolbox and chair. This year the Curaçao Tourism Board has a special deal with the BasilaChill stand where locals and tourists are welcome; 1 day $50, 3 days $110, ask at the reception of your hotel or call 517 1168. Do you prefer to mingle with the hip 30-something locals then the Groove Lounge stand is smaller but great fun.

Where you stand can also influence your experience. Don’t want to make it too late? For example if you are accompanied by young kids or teens or if you want to be able get away quickly? Then it is suggested to stand along the first half of the parade, from Santa Maria till the roundabout at Palu Blanku. There it is also fairly easy to park closeby in the adjacent streets and to make a fast getaway when you are done. Though we admit that the vibe on the first half is always a bit less lively than at the second part and towards the end. The Roodeweg into the Breedestraat is probably the most popular and most vibrant part in Otrabanda to see the parade. Most paid stands are on this part of the route.

6. Route of the parades

See below a simple map of the parade. The route is about 6 km and normally on foot it will take about 1.5 hours. Due to the speed of movement, the many groups and trucks the carnival parades can build up some delay and take quite a bit longer than that. First half of the parade also has less fences along the road. From the second half of the route the people partying on the side lines are parted from the parade by fences for safety reasons. 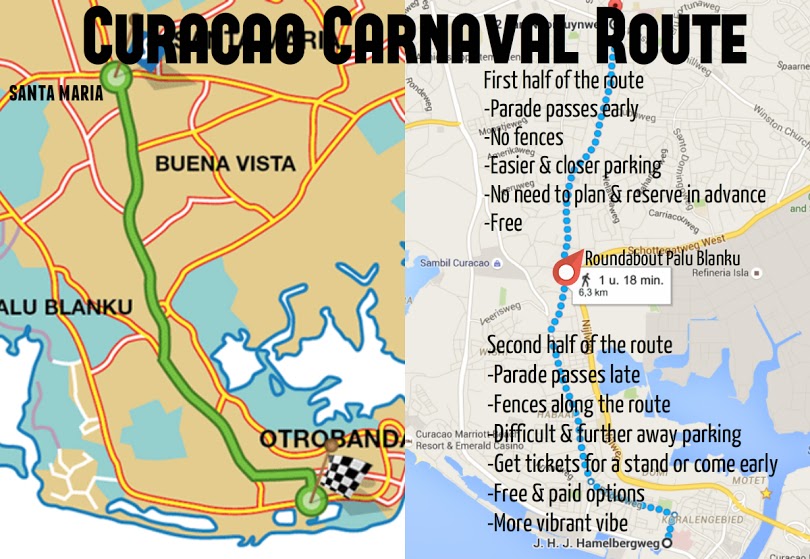 Are you into photography? The best time to get good images of the colorful carnival groups is during daylight. In a paid stand, you are often a bit further from the parade, but you can take pics from a more elevated point of view. Want more close-ups then it’s best to stand at the beginning of the parade as there will be no fences separating you from the participants. If you are standing after the second half of the route, make sure you check the position of the sun and choose sides in advance, because when the parade is passing it is impossible to change sides. You wouldn’t want to have backlight all through the parade! Before and after the parade you can walk around and get great shots of the happy audience. Of course if you have a special camera and a good flash you can also get great shots at night, the many decorative lights and glittery elements will give your images a special and warm effect. Are you a professional photographer, then you could inform at the CTDB for press options.

8. King of the Tumba & Queen of the Carnival

The music that’s traditional to Curaçao Carnival is the Tumba. It has a specific sound and is originally from Curaçao. There is nothing like it elsewhere in the world to our knowledge. The tumba is loved my many, but for others it is also something that you learn to love. During the Tumba festival local musicians participate with their song to win the title of the King of the Tumba, “Rei di Tumba”. That one song will be played the most by all the bands during the parade and the King of the Tumba has the honor to walk ahead of the parade with the “Rei di Tumba” mantle and crown! Listen to some Tumba on Skempi, a music platform for Caribbean music. Each year also the “Reina di Karnaval”, Queen of the Carnival, is selected and will lead the parade on a beautifully decorated float.

9. Protect your skin! The Curaçao sun is hot hot.

During Carnival season Curaçao usually can guarantee pretty sunny weather. Especially during the Main Parade, the Gran Marcha, make sure you apply sunscreen before heading out and don’t forget to reapply halfway through the day. Bringing a hat or cap is also not such a bad idea. If you got tickets for a paid stand, the stand often also provides complete or partial shade.

The Curaçao Carnaval is not over in an hour or two, the whole thing might take you minimum half day if not much much longer. Whatever you eat or drink, or if it contains alcohol or not, make sure you also drink a fair amount of water in between. Remember it’s a long day in the sunny or warm weather, plus you’ll be sweating more due to this heat and the dancing, so make sure you keep hydrated! You wouldn’t want to become unwell and miss out on the rest of the carnival right?

Need some visual idea of the Curaçao Carnaval? Check out this Curaçao Carnaval video on You Tube. Notice the colorful costumes, the tumba music, the dance moves and the smiles everywhere!

12. To get into the mood: pre carnival events

Curaçao Carnaval is not just about the parades, there is a whole prep-time and warming up leading up to it! Big part of that is the Tumba Festival, where the singers compete for the King of the Tumba title and the carnival song of the year gets chosen. Besides that the weeks before the actual parade there are also numerous jump-ins, which replaced the jump-ups over the years, you can see it as a great warming up to get into the carnival vibe. With your ticket, you will get a t-shirt that you can pimp if you want, and all night the bands are playing and the people are dancing and jumping to the tumba music. A good place to check what is going before and during the carnival is on the Asosashon Gruponan di Karnaval Kòrsou Facebook page.

13. Respect each others space

When you are not in a paid stand and did not reserve your spot on the street well in advance, make sure you do respect the people that did. Some families have been at the same location for decades, and it could be that they won’t be too happy when you just show up and stand right in front of them the whole time. Of course Curaçao Carnaval is for everyone to enjoy, and everyone is happy and is dancing on these days, but this is one thing that could cause slight irritation between viewers. Just respect each others space a little and all will be fine.

14. History of our carnival

It’s always good and interesting to learn a bit more background info on a certain cultural event. Want to learn more about the history of the Curaçao Carnaval then have a read here and over here you will find a comprehensive explanation in Dutch.

Best tip of the day is probably to go with the flow! In the end It’s all about enjoyment and togetherness. All cultures come together to enjoy this local tradition. During carnival, don’t worry too much, it’s wiser not to be on a time schedule, things might take a little longer sometime, on your way back home you might run into some traffic jams.. it’s all possible! Just relax, smile and go with the flow!